The Castle Cats VIP system was introduced in August, 2019[1], and moderately revised in January, 2021, with version 2.16.1. It works similarly to VIP systems in many other games: Players are awarded VIP XP for making real-money purchases and receive progressively more and better benefits as their VIP rank increases. VIP ranks range from 0 to 7, and a player's rank never decreases. VIP progress and rewards information can be accessed by tapping the shield icon in the upper left of the guild hall screen.

In general, players are awarded 250 VIP XP for every $5 USD spent. The XP award is always applied in full, with any XP remaining after reaching a new rank applied toward the next rank. Following is a chart showing the XP and real-money amounts required to achieve each rank.

Following are the automatic, permanent rewards for reaching particular ranks.

Images of all of these items can be found on the Avatar Customization page. 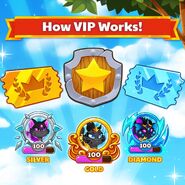