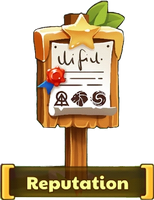 Reputation Quests are a end-game feature introduced in Version 2.2.1. These rare quests may appear from Quest Level 6 and up, once your guild level reached 20.


For Missions Reputation Quests will count under "Normal quests".

Reputation Quests reward you with Reputation Tokens, that can be given to your Allies: the Whiskers, the Mighty Lions and the Zenpaws. Through the "Reputation Board" on the top middle of your screen, you can access the menu and select the Ally you have collected Tokens for.

Once a Guild Leader has received the total amount of Tokens required, they will start crafting a Reputation Chest for you. This takes 24 hours and can only be done by one Guild Leader at a time (Note that this can be finished instantly with gems). Reputation Quests will still show up, so you can continue collecting Tokens. These, and the Tokens that weren't needed to start crafting, will be kept in your inventory. You can have up to 100 Tokens in your inventory.

Amount of tokens required to get to each Reputation Level.

All Quests require six skills and three cats. More than one same level quest for a Guild can show up per board reset. There may or may not be more than one name per quest level for each Guild; If you do see a Quest that is the same level and is for the same Guild but has a different name than is listed here, please comment!

Retrieved from "https://castle-cats-pocapp.fandom.com/wiki/Reputation_Quests?oldid=31120"
Community content is available under CC-BY-SA unless otherwise noted.