➢ Minty Heart is acquired by recruiting three new players to download Castle Cats and play the game through completion of the Tutorial. Recruits must download the app from special links generated through the "Invite" button on the Invite Friends tab of the Daily Events menu (scroll icon). Note that the game's age gate must be set to 16+ in order for the Invite feature to be accessible.

Links can be delivered via text message, email, Messenger, Facebook post, and other available channels. Each recruit must use a different link and must download the app to a device that has never had the game installed on it before. Facebook is not required nor is it necessary to add recruits as Facebook friends. As each recruit completes the tutorial, their Castle Cats avatar will appear in one of the boxes on the Invite Friends tab. Minty Heart will be awarded when all three boxes have been filled.[1] 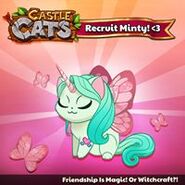 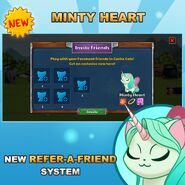