Mini-games are simple time- or score-based challenges—unrelated to Castle Cats' primary gameplay—in which players can earn small amounts of resources for use in the main game. They are accessed by tapping on the playing cards in the upper right corner of the guild hall screen.

Murrmory was added in version 1.6.3, and is a "Memory" game. It is played like a standard memory game; you tap on the cats to match them in pairs. Only 2 cats are revealed at a time - one move - and there is no time limit, but the time taken is one contributing factor to the rewards you will earn upon completing a game.

Matching Mania was added in version 2.5.1, and is a match-three puzzle game. In 20 moves you must try and clear as many tiles as you can by matching three or more of the same tile. There is no time limit, and the time taken does not determine the rewards you will earn upon completing a game.

Destroys tiles in a 4x4 radius.

Shoots 3 beams in every direction.

Shoots a beam in every direction.

Clears all the tiles.

Mini-games offer rewards of potions, gems and coins, as follows.

They are the only way to get large amounts of potions that replenish Tap Energy consumed while actively engaged in battle. One potion is awarded upon completion of a game regardless of time or score, up to a maximum of five per hour.

Players can also earn up to four gems a day, with the possibility of an additional gem from a Daily Quest. Gems are only awarded when certain performance criteria have been met, as described in the next section.

When a game does not result in the award of a gem, either because the criteria were not met or because the daily cap has already been reached, a small amount of coins is awarded instead, with the amount varying based on performance, also described below.

In Murrmory both the time and moves taken determine the rewards.

In Matching Mania only the score determines the rewards.

Promotional or Teaser images focusing on mini-games, as posted on the Official Facebook page. 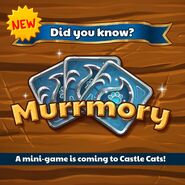 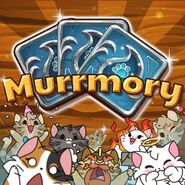 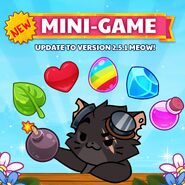 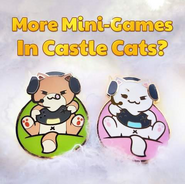