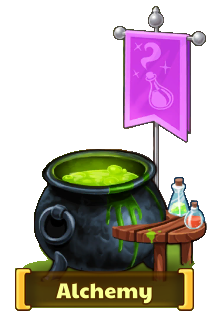 Alchemy is used to hatch cat heroes from eggs and create quest- and battle-enhancement items, embers, and plushies. Only one item can be crafted at a time. As an item is being crafted, a progress bar in the lower left of the Alchemy window displays the time remaining. Tapping on the bar provides an option to finish crafting immediately for a payment in gems; as the length of time remaining decreases, so does the required number of gems.

In addition to embers and plushie shells, the Quest tab offers five items (the first five on the list) that enhance quests in various ways. Crafting these items is more accurately regarded as replenishing the charges they hold, as each has a set maximum number of either 3 or 5. The number of charges remaining on an item is displayed in the upper left of the tab above its picture. An item can only be recrafted (replenished) if its remaining charges are below its maximum capacity. If an item is recrafted before all of its charges have been depleted, however, any remaining charges will be lost when it is claimed. After crafting, the items must be activated—and can be de- and re-activated at will—in the Inventory window accessed by tapping on the box of potions in the upper left of the quest selection and quest configuration screens.

These items are usable in the midst of battle. You receive one item per craft, and a full stack consists of five each.

Alchemy eggs can be crafted into specific heroes. Following is a list of those eggs that are always available for crafting. During events, additional eggs appear in the Alchemy station for crafting only while the event is ongoing. See the Egg List for a complete roster of Alchemy cats, including those associated with events.

Note: The Plushies tab is hidden at the bottom of the list, below the Eggs tab; the list must be scrolled before it becomes visible.
Plushies were added in March, 2020, with version 2.11 and unlock at Guild Level 50. They are miniature versions of various heroes, equippable as guild leader accessories. Many plushies are available to be unlocked at any time while others are event-specific and can only be unlocked and crafted while the event is ongoing.

Before a plushie can be crafted, indeed before it even appears in the Alchemy station, its recipe must be unlocked by meeting specific criteria which are not always explicitly known. You do not need to own a hero to unlock its plushie's recipe. When a recipe is unlocked, a notification appears briefly at the bottom of the screen with the following message: "A new Item has been unlocked in the Alchemy Station…" (This notification has been known to be delayed, however. The guild hall screen might need to be reloaded—by opening a different screen, eg. the Fortress or the Hero Book, and returning to the guild hall—before the plushie recipe appears in the Alchemy station.)

Progress related to plushie unlock requirements is not counted until a guild has reached level 50. When new plushies are released, however, progress toward meeting their unlock criteria will be applied retroactively for players who are already over level 50.

For the duration of the event, colored Easter Eggs had the chance to drop when cats were shaken for gold.

For the duration of the event, pearls can spawn to the right of the archway in the guild hall. Pearls spawn a maximum of once per day, and have a chance to spawn when the guild hall is reloaded and it is not raining. If VFX is on, collecting a pearl will trigger rain that will continue for the rest of the day; if it's not still raining, then the game did not save the pearl being collected. VFX does not need to be on for pearls to spawn, it just helps provide feedback on when a pearl can spawn and when one has been collected.

Retrieved from "https://castle-cats-pocapp.fandom.com/wiki/Alchemy?oldid=32681"
Community content is available under CC-BY-SA unless otherwise noted.